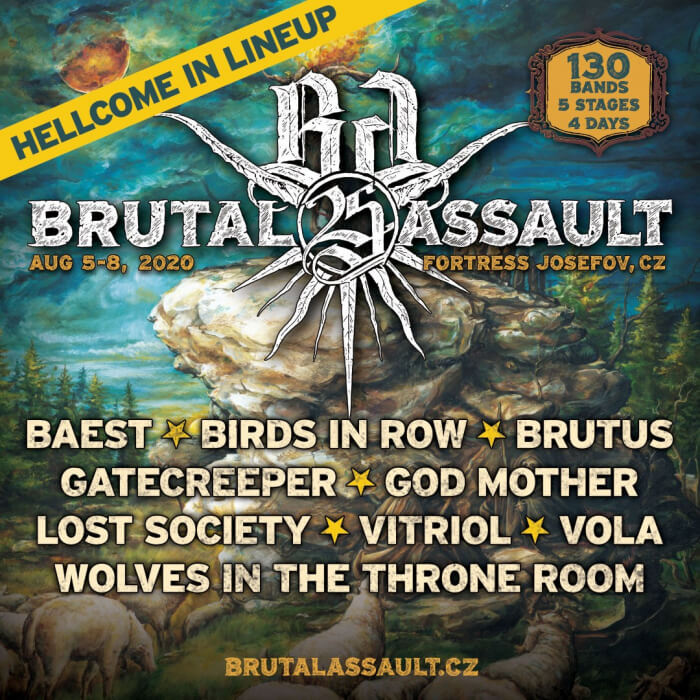 As you all known, Brutal Assault does not just build anything-goes type of line-up around a couple of big names; we try to seek out young talents that resonate with the underground scene, or those that yet need (and deserve) to be discovered by the masses. And this is what this update is all about.
The Finns LOST SOCIETY have already introduced themselves in our fortress. This bunch of four skillful musicians has slightly moved away from the classic thrash sound on the new album “No Absolution” and incorporated more melodies with a lot of groove on top so the final mix can stand comparison with the likes of Trivium, Sylosis or Devildriver.
WOLVES IN THE THRONE ROOM are one of the first bands whose music led to creation of the post-black metal label. The focus on atmosphere and the strong use of calmer elements in the long-flowing compositions channel the energies of the Pacific Northwest’s landscape into the musical world of WITTR. Since 2002 the band has gained an unprecedented reputation and toured the world including appearance at BA and now looks forward to bring in even more intensive show.
The very distinctive but genre-ambiguous music of the Danes in VOLA represents a promising fresh blood. They can draw inspiration from polyrhythmic kings Meshuggah but also incorporate 80’s synth-pop at the same time. And they are no copy-cats but rather heavy metal chameleons who can twist and tweak all the inspirational sources and merge them into something new and unique and add beautiful vocal lines on top. The members in the Belgian band BRUTUS including the singer-drummer Stefanie Mannaerts are actually no brutes at all as they demonstrated on the tours with Cult of Luna or Chelsea Wolfe. Well, since the fans first started to take notice of their catchy and groovy rock and intense live energy, they’re now starting to headline their own tours and interlace their basics with post-rock elements, charismatic vocals and bit of speeding thrashy vibe.
Even though Arizona’s GATECREEPER will represent the young American death metal generation, many would be guessed they’re some veterans from Sweden judging from the music alone. They build on oldschool base, the classic Swedish sound and rolling mid-tempo of the likes of Bolt Thrower or Asphyx. The Oregon wrecking crew VITRIOL on the other hand intends to punish you with their violent blackened death metal from start to finish. Their metal fury is closely related to Hate Eternal but does not lack the raw cruelty of Gorguts or Ulcerate and also you surely have guessed by now that they pay a lot of attention to precise composition. BAEST hail from Denmark but they again build on strong Swedish death metal foundations. However with their recent recording „Venenum“ their sound evolves towards a more diverse approach, further embracing elements reminiscent of Morbid Angel or Death, mounting in a whole batch of crushing anthems.
BIRDS IN ROW is an experimental hardcore punk/metal trio who write punitive, exasperated tunes with exquisite, dark textures. Their members maintain a level of anonymity to pin the focus on the music itself rather than those who create it. Birds in Row is committed to a true DIY ethic, placing all their efforts into the creation of a deep fan-to-artist connection. GOD MOTHER also branch out from hardcore roots. But their aggressive, energetic and fast-paced HC is further seasoned with death metal, sludge and tasty breakdowns.
Bands in the update #8: Baest, Birds In Row, Brutus, Gatecreeper, God Mother, Lost Society, Vitriol, Vola, Wolves In The Throne Room